American Legion Auxiliary units, and entire Legion post homes, have the opportunity to host screenings of the critically acclaimed animated motion picture about Sgt. Stubby – the only dog to become a Legionnaire.

Screenings of the family-friendly film Sgt. Stubby: an American Hero can be for fellow unit members and Legionnaires, or as a fundraising event open to the community. It can also be a viewing at a local school to educate and entertain children while promoting patriotism and a respect for our country’s military. There are numerous ways to use this opportunity.

Screening opportunities for Legion post homes are being offered by VetFlicks, a 501(c)(3) nonprofit program that focuses on veteran outreach, with permission of Georgia-based Fun Academy Motion Pictures film studio.

“We have successfully assisted many posts in setting up special events. This includes screening permissions, assistance with fees, and helping post homes promote and hold amazing events for themselves and their communities. What better way to involve the youth of our country with a celebration of history — and a way to have fun learning while being entertained? We 100 percent support Fun Academy Studios and their amazing film which made the Academy Awards Shortlist. Variety Magazine listed Sgt. Stubby: An American Hero, a contender for Oscar Gold,” Hamrick said.

The film is based on a true story of the canine’s journey from being a stray roaming the streets of New Haven, Conn., to being the first dog given rank in the U.S. Armed Forces.

As the story goes, Stubby was rescued by U.S. Army “Doughboy” J. Richard Conroy just as World War I was about to start. Smuggled into the military by his new owner and winding up in the trenches in France, Stubby eventually saved many lives. His efforts included warning his Army unit of a gas attack, and playing a part in the capture of a German spy. Stubby was a highly decorated hound believed by many to be the predecessor of modern military dogs and police dogs.

The Sgt. Stubby movie brings the dog’s story to life with computer-animated images and the voices of talented actors, including Helena Bonham Carter, Logan Lerman, and Gérard Depardieu. 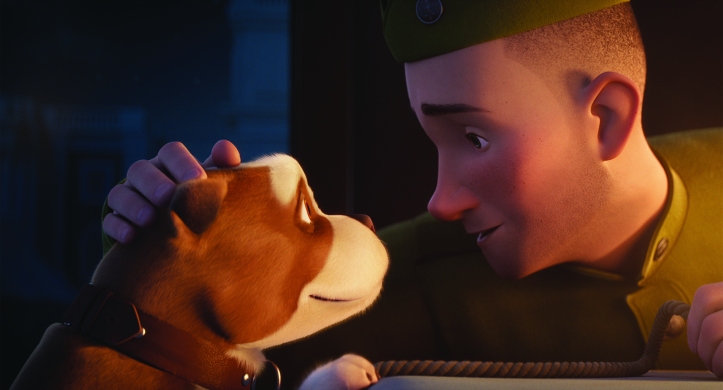