Honoring their spouse’s military service. Showing care and appreciation for veterans, military, and their families. Being part of something positive that’s bigger than oneself. Supporting The American Legion Family.

Those are among the many reasons voiced by numerous male spouses of U.S. military veterans and servicemembers who have joined the American Legion Auxiliary after ALA membership eligibility was extended to them nearly six months ago. Those are the same reasons given by many women who have become ALA members throughout the last 100 years.

Such motivations underscore what the American Legion Auxiliary is: a community of volunteers serving veterans, military, and their families. Offering the opportunity to join the ALA to male spouses of veterans and servicemembers makes sense, considering the population we aim to serve. It helps us become even more inclusive.

For a long time, America’s military was predominantly male. But the number of women serving in the military has been on the rise for several decades. Currently, 1.9 million women veterans are living in the United States, and 9% of the U.S. military is female. By 2045, it’s estimated that 18% of the military will be comprised of women. Female spouses of women veterans have already been able to join the ALA, as long as other membership criteria are met.

Auxiliary membership eligibility has been extended to include male spouses of U.S. veterans and servicemembers who served in either of the following periods: April 6, 1917 to Nov. 11, 1918; and any time after Dec. 7, 1941. Other eligibility requirements can be found at www.ALAforVeterans.org.

As of presstime, more than 400 male spouses of veterans or servicemembers have joined the ALA.

This change in ALA eligibility regarding male spouses became official when ALA delegates at the Auxiliary’s 99th annual National Convention in August 2019 voted to update the ALA’s Constitution & Bylaws so that it states the following: “Eligibility for membership in the American Legion Auxiliary is determined by The American Legion.”

The Legion’s delegates to its 2019 National Convention, also in August, voted to change the wording in the ALA’s membership criteria — replacing “wife” with “spouse” — in the Legion’s Constitution & Bylaws.

Read on to meet a few of our newest ALA members who are male spouses of veterans.

ALA ELIGIBILITY: Spouse of U.S. Army veteran Bobbie Sinner, who serves in the Army National Guard in South Carolina. She is a Legionnaire of Post 7 in Lexington, S.C., and an ALA member of Unit 15 in Sumter.

HIS OTHER LEGION FAMILY MEMBERSHIP: Also a Legionnaire of Post 7 in Lexington.

Brandon Sinner walked into a room full of women who cheered and waved signs with welcome messages directed at him during the ALA Department of South Carolina’s fall conference. A camera crew from a regional television news station was filming. The news? Sinner had recently become the first male spouse American Legion Auxiliary member in South Carolina.

While Sinner doesn’t like being the center of attention, he said he appreciated the warm welcome.

“I know those ladies out there love the ALA. I know this change is a big deal for them. I wanted to be there to support [them], support my wife, support the Auxiliary, and the entire Legion Family,” he added. “I don’t have any issues about being in a room full of women or a room full of men. Everybody’s equal in my eyes, and each person has something to bring to the table.”

Long before ALA membership criteria were established for male spouses of veterans, Sinner had already taken on a support role in his family as a stay-at-home dad and devoted husband. He and his wife, Bobbie, have two daughters: ALA Junior members Elsie, 10, and Esper, 4. Sinner feels his perspective as a veteran and a father within a military family could be valuable to the ALA, whose mission is to honor and support veterans, servicemembers, and their families.

Sinner shared a short story about one of his fatherhood experiences during his wife’s military deployment:

“When our oldest daughter was a year old, Bobbie was deployed to Afghanistan for nine months. I was an infantry guy; I wasn’t trained for anything like taking care of our 1-year-old baby. Twelve months in Iraq was easier than nine months at home with a 1-year-old! I’m like, ‘Is she eating enough? Is she getting enough sleep? Am I doing this right?’

“We were able to Skype with Bobbie. She recorded videos of herself reading children’s stories and sent them home for Elsie. One of the coolest things was, when Bobbie got home, Elsie knew exactly who her mother was and went right to her. There was no delay or nudge, or anything like that. Once that happened, I knew I did everything right.

I’ve just done it all. I really think [having been in] the military helped me out with that. The traditional gender roles stuff goes out the window when you’re a family unit. You’re a team. One covers down for the other one. That’s basically what happens.”

Sinner said he sees the Legion Family as a team also, and he’s happy to take on another support role through his ALA membership. 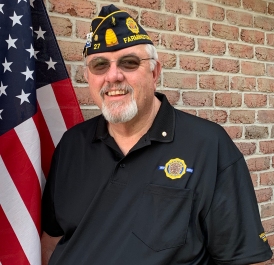 ALA Member of Unit 27 in Farmington, Utah

ALA ELIGIBILITY: Spouse of U.S. Army and U.S. Army Reserve veteran Paula Stephenson, a Paid Up For Life Legionnaire and ALA unit member of Post and Unit 27 in Farmington.

“It’s the same reason I joined the Sons of The American Legion when someone said to me, ‘It’s a way to honor your father’s service.’ And I thought joining the Auxiliary is just an excellent way to honor my spouse’s service. I know she’s very proud of her service, and I’m always trying to support her the best way I can. For me, it was a no-brainer,” Stephenson said. He joined the Sons under the service of his father, World War II Army veteran Archie Bert Stephenson.

“There aren’t very many people we know who fall into this category where they’re eligible to become members of the Auxiliary, the Legion, and the Sons. I think it’s an amazing opportunity to pay tribute to the service of those I love, and a great way to support other veterans, military, and their families,” he added.

“It shows that The American Legion and the American Legion Auxiliary are willing to change with the times. Let’s let everybody who’s eligible have the ability be a part of our great organizations. It’s a step in the right direction,” he explained. “You know, sometimes there are assumptions made about who is the veteran in military families. I’ve seen that done. You just kind of have to flip that switch in your mind and see that the female spouse can be the veteran, or both spouses can be veterans.”

ALA Member of Unit 364 in Woodbridge, Va.

ALA ELIGIBILITY: Spouse of U.S. Marine Corps veteran Jennifer Nuntavong. She is a Legionnaire of Post 364 in Woodbridge.

HIS OTHER LEGION FAMILY MEMBERSHIP: Legionnaire of Post 43 in Hollywood, Calif.

As soon as Chanin Nuntavong heard that ALA membership eligibility was expanded to male spouses, he decided to become an American Legion Auxiliary member. He didn’t hesitate following through with his decision.

“It’s my honor to do so. I’m very proud of my wife’s service. I am proud of all spouses who have been there for their loved ones as they served our country,” he said. “I spent 22 years as a Marine, and throughout my career, a lot of my female colleagues had male spouses who had never served. And they are the ones who held down the home front while their spouses were deployed. That’s an important part of the family and the balance of everything. I think that should be rewarded and honored, and I think that’s what the Auxiliary does.”

Expanding membership opportunities to eligible male spouses of veterans and servicemembers adds another dimension to the already inclusive and diverse American Legion Auxiliary and The American Legion Family.

“The inclusiveness — just getting everyone involved — is the biggest thing. The Legion Family has always been welcoming to me and my family. It’s home for us. As long as we keep doing what we’re doing, it’ll be home to other veterans, servicemembers, and their families,” Nuntavong said.

A CHAT WITH MORE MALE SPOUSE ALA MEMBERS

Why did you join the American Legion Auxiliary?

ALA PUFL member of Unit 243 in North Spokane, Wash.

“The [ALA] ladies do a fantastic job and I’m happy to help them. It’s an honor to be part of the American Legion Auxiliary, and it’s a great way to pay tribute to my wife for her military service.”

ALA ELIGIBILITY: Spouse of U.S. Army veteran Linda Hazelmyer, a PUFL Legionnaire of Post 9 in Spokane, Wash., and Auxiliary PUFL member of Unit 243 in North Spokane.

HIS OTHER LEGION FAMILY MEMBERSHIPS: Also a PUFL Legionnaire of Post 243 in North Spokane.

ALA Member of Unit 87 in Hodgenville, Ky.

ALA ELIGIBILITY: Spouse of U.S. Army veteran Ashley Roten, a Legionnaire and ALA member of Post and Unit 87 in Hodgenville.

ALA PUFL Member of Unit 672 in Middletown, Ill.

ALA ELIGIBILITY: Spouse of U.S. Navy veteran Valerie Tibbs, an ALA PUFL member of Unit 672, and Legionnaire of Post 672, in Middletown.

HIS OTHER LEGION FAMILY MEMBERSHIPS: Also a Legionnaire of Post 672 in Middletown.

How can this change to ALA membership eligibility help strengthen the entire American Legion Family? 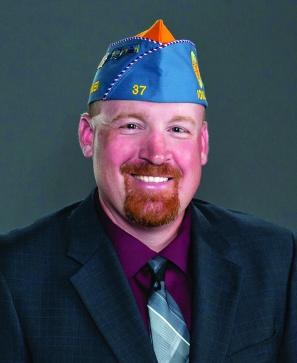 ALA member of Unit 37 in Ames, Iowa

“We need to keep membership strong in all parts of our Legion Family. Without one part of the Legion Family, we lose a lot of our power when we are advocating for our veterans, our military, and our military families.”

ALA ELIGIBILITY: Spouse of U.S. Navy veteran Jennifer Monserud, a Legionnaire and ALA member of Post 37 and Unit 37 in Ames.

HIS OTHER LEGION FAMILY MEMBERSHIPS: Legionnaire of Post 37, member of Sons of The American Legion Squadron 37, and Legion Rider member at Post 37 in Ames. 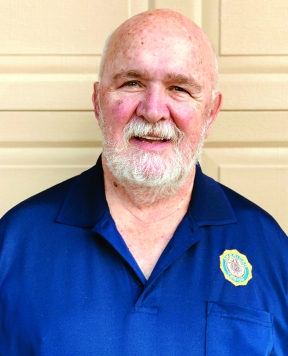 ALA PUFL Member of Unit 7 in Twin Falls, Idaho

ALA ELIGIBILITY: Spouse of Linda Brugger, veteran of the U.S. Navy and U.S. Air Force Reserve. She is a PUFL Auxiliary member and Legionnaire of Unit and Post 7 in Twin Falls.

HIS OTHER LEGION FAMILY MEMBERSHIPS: Also a PUFL Legionnaire of Post 7 in Twin Falls.

ALA member of Unit 459 in Grand Rapids, Mich.

ALA ELIGIBILITY: Spouse of U.S. Navy veteran Theresa Robinson, an ALA member of Unit 459 in Grand Rapids, Mich., and Legionnaire of Post 311 in East Grand Rapids.

HIS OTHER LEGION FAMILY MEMBERSHIPS: Also a Legionnaire at Post 311 in East Grand Rapids.

“We’re trying to promote the Legion Family any way we can. Being dual members puts [my wife and me] in more contact with the Auxiliary. Our post doesn’t have an Auxiliary unit.”

This article originally appeared in the February 2020 Auxiliary magazine.